I am by no means a fitness fanatic. I do not go to the gym every day, week, month, or even year. I do not purchase gargantuan containers of protein powder to mix into smoothies. I do not constantly make body building posts on social media exploring the psychological journey paralleling my physical one. I do exercise. Exercise is very important for both body and mind. Labban and Etnier find that exercise boosts the encoding stage of long-term memory storage.[1] Neuroscientist Wendy Suzuki asserts that exercise has incredible effects on the brain, increasing attention and constructing optimal resilience to aging and neuro-degenerative disease.[2] It is for such reasons that I have always made staying active a priority. I have done this through playing sports and through devising my own fitness routines.

According to Li, Keeler, and Jetter, intrinsically motivating aspects such as fun are vital to the success of a workout routine.[3] This is why playing a sport is one of the best ways to stay fit. My game of choice is football/soccer. Though I progressed to the varsity level in high school, in college my football is far less competitive. I played very often during my first years in college but have been unable to play as much as classes have become more rigorous. Football kept me very fit. I was constantly working out, but I was really just playing a game. It just so happens that I also met my best friends in college through football. Apart from the occasional injury, there were very few downsides to playing and I am trying to start playing more frequently again. Since those early years, I have had to adapt to other strategies of staying fit.

Last year I no longer lived on campus, but I lived within walking distance. This allowed me to use the gym on campus. Since I did not have as much time for football, I did some research on working out at the gym and developed a routine. I would go to the gym two days a week and do a series of weight lifting exercises I found online. Since the gym was open from morning until midnight, there was always some time when I could go. I challenged myself to do this for five weeks and succeeded. It was difficult at first. I was a complete stranger to weight lifting, so the first time I did my 45-minute workout, it took about two hours. On the opposite end of the spectrum, there was a week when I almost fell behind, getting to the gym at 11:30; that was the quickest workout I have ever done. I learned a lot from the experience.

I am the type of person who prefers to complete a task in one sitting; I do not want to return to it. For example, I am the type of person who will have five bags of groceries in each hand to avoid making a second trip. This behavior manifested itself in my attempts at working out in the past. I would go to the gym, give all of my effort, and leave completely exhausted. I rarely convinced myself to return because I associated working out with extreme fatigue and days of soreness. My overexertion was a form of dysfunctional exercise, which keeps many people from enjoying a healthy fitness routine.[3] When I did the five weeks challenge, I never exhausted myself. I started off slowly with a manageable amount of weight and did not strain myself to use every ounce of effort. Each time I felt my muscles growing. My routine was effective, not just in increasing my fitness, but in keeping me motivated to return.

This year I do not live on campus or within walking distance. The combination of time constraints and gas usually keeps me from making trips back to campus for football or the gym. I now work out at home. The routine I have devised is similar to the one I used at the gym. I started with a very light workout and slowly built up the intensity so that I never woke up in the morning dreading my workout. I began with one set of ten push-ups, for four different types of push-ups. I have since added abdominal exercises. Every time I do the workout, I increase each set by one push-up. I divide my workout by doing two sets of push-ups, an abdominal workout, and then the remaining two sets of push-ups. I alternate between two abdominal workouts each day to incorporate muscle confusion into my regimen. I am not a fitness buff, but exercise is an important part of my life.

My name is Jordan Matthews and I am a third-year student at Appalachian State University. I am a double major in Theatre Performance and Political Science with a double minor in French and Japanese. I am currently applying for the accelerated master’s program in Political Science that I would complete upon returning from studying abroad for the next academic year in Japan. Though my main goal is to be an actor, I will use my other passions, such as political science and languages, to do meaningful work while providing for myself until acting can support me.

It was freshman year of high school and my class was in the middle of...

As we go through our day to day tasks – working, running errands, exercising, spending...

Fitness should be an important part of every persons day to day life because it...

Ask anyone about the benefits of fitness and you will find that improvements in muscle... 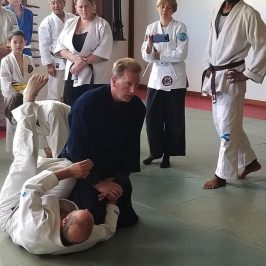 I have been fortunate. I was introduced to Martial Arts when I was fifteen years...